Reporter and Photographer - Noel Donaldson
A FIRST-HALF brace gave Academy the perfect start to their title challenge. Stephen Anderson stunned the visitors in opening minutes with a well-placed header but despite pressing for their second, it didn't come until the dying seconds of the first period. Richard Macadie put down a marker for a regular team place this season, finding a path through the congested defence with a well place ball.

Today saw probably the biggest ever convoyof Landrovers to make the trip from Landsend to John O'Groats.  All in the aid of three charities the crews havehad a great time meeting each other.  A few are also now heading off to do the North Caost 500 as they have already completed the east coast part.  Over 270 landrovers took part and we may have missed a few as John O'Groats was extremely crowded today.  There are many photos  in our gallery.

Halkirk Highland Games On Saturday 30th July - See You There
March to the Field at Noon - - 12.15pm - Opening Ceremony followed by full day of Events (Open & Juniors)
Royal Scots Dragoon Guards pipe band for 2016. This is the first time that the military band has played at Halkirk. 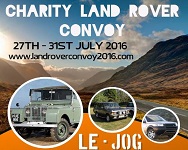 Wick Councillor Bill Fernie and Caithness area committee shairman Coucnillor Roger Saxon recently visited the construction site of the new Wick High school.  They saw round the school and looked at the recently mentioned problematic beam on one seciton of the roof.  The beam will be replaced and the councillors were told it is unlikely to hold up progress at this stage.
Pallets Free For Collection At Construction Site at new Wick High School

The constructions site at Wick High school is offering pallets to anyone who can collect them.  They have built up over the months and unlike inthe south the comany cannot dispose of them easily to other firms.  They are offering them free to anyone who can collect them.  They come in various sizes andor are likely to arrive as materials are coming to the site every week.  Some twil go to the Wick Gala Bonfire but many wil stil remian for anyone wha wants them.  Contact the site office initially to arrange a collection time and day.

INTERMITTENT rain failed to dampen the imaginative enthusiasm of entrants at the fancy dress competition at Braehead - one of the most popular events in Wick Gala Week's packed programme.

Scary characters with something to crow about

WORZEL Gummidge would doubtless have dismissed it as the last straw...scarecrows deserting their field posts to show themselves off in town.. Goodness knows what Aunt Sally would have said. But surely she would have relented and allowed the bird scarers their moment in the limelight, seeing as it's all in a good cause - Wick Gala Week.
Photo Gallery   We will add more if we find them as we go abut the town.
Send in any to bill@caithness.org for inclusionin the gallery.

And Even More Wick Gala Photos

Thanks to Alistair Sinclair for another batch of Wick Gala photos.  Who can you spot in this latest collection now added.

To see all the Wick Gala photos go HERE

This short video wil show you some ofthe spectacular places you can see on a trip with Caithness Seacoast from Wick harbour every day.

If anyone wishes to add any special photos of the night then email them to bill@caithness.org to add to the gallery.

The Pulteneytown People's Project is delighted that Central Superhero Events will be coming to the Pulteney Centre on Friday 5th of August 2016 with their Superhero Shows. Come along with your kids and meet the famous central superheroes Batman, Spider man, Captain American, Hulk, Iron Man and Transformer Bumblebee. Tickets From Pulteney Centre.

Wick Gala Week - Full Programme
A week packed with events starting with a run on Saturday and the Gala night parade.  Throughout the week there are events for all ages and families so check it al out and get out and about in Wick..

Caithness County Show 2016 - Hundreds Of Photos of The 175th Show

The Highland Council is to throw open the doors of 30 Princes Street on the corner with St John Square in Thurso on Saturday 16th July 2016 to give members of the public, councillors and community councillors the chance to see how it has restored and brought back into use this iconic Category B listed building which sits a prime position within the conservation area of the town. Originally constructed in the early 1800s, over a period of time, lack of maintenance led to the demolition of the chimney head and the rear stair tower. The building became an eyesore and in order to save it, The Highland Council acquired the building by Compulsory Purchase.
Photos of the way it was in January 2013          See other old buildings in Caithness under threat

Wick's Pipe Band Week finished on a rather damp note on Saturday. Rain had threatened all day and finally came around teatime and continued relentlessly. Band Secretary, John Bogle said "At 6.45pm there was no let up in the rain so we made the decision to transfer our Fun Night, when the pipe band appears in fancy dress, to the Pipe Band Hall. It was such a horrible night that I thought we would be lucky if 20 people appeared at the hall, however they just kept coming and coming, we have 100 chairs in the hall and put every one out but still more folk came and were standing at both doors."                                    Photo Gallery                         Community Pages

Castletown Gala  - Another Photo Sent In

Fiona Mackenzie sent in this photo of her grand daughter at Castletown Gala.  She said, "This is my 20 month old Grandaughter Alba Mackenzie who lives in Lossimouth she won first prize in the 0-5 age group as a fairy cake."   If anyone would like to add to any of our galas or show photo galleries just email them to bill@caithness.org

The Latheron Show was held in Lybster  due to the soft ground at the usual venue.  The day was cold but the rain stayed away if only just but it did not put off the entries or people making Lybster busier than any day of the  year.

HIGHLIFE HIGHLAND AND THURSO SQUASH, TENNIS AND RACKETBALL CLUB INVITE YOU TO TAKE PART IN THE GREAT BRITISH TENNIS WEEKEND.
SATURDAY/ SUNDAY 16th and 17th JULY 2016 Olrig Street, Tennis Courts, Thurso
All the equipment necessary will be provide for you free of charge. Come along, take part and have some fun learning tennis skills through drills and games under the guidance of our local tennis coach, Carole Cameron, and tennis leaders.

93rd Latheron Show 2016  - Change of Venues Due to wet weather in recent days the Latheron Show has had to have a change of venues.  As last year the show will split between Lybster and Halkirk.  No entry fees will be charge but donations will be gratefully received as this will be the second year the show will make a loss.  Cattle and sheep judging wil take place behind the Portland Hotel, Lybster. Flower show wilbein the Lybster Hall.  Crafts will be at Lybster Golf Club while poultry wilbe judged  at the football pitch. Horse events will take place at Northfield Livery Stable at Halkirk.  A circus act Fire and Sparks will be in Lybster as well as the Animal Petting Zoo from Glasgow.

Atlantis, a global leader in the tidal power sector, is pleased to announce a major technical milestone for its flagship MeyGen project in northern Scotland. The MeyGen project is now connected to the 33kV Ness of Quoys distribution network following the successful installation of one of the longest underground 33kV power export cables in the UK by the network operator, Scottish Hydro Electric Power Distribution plc ("SHEPD").
MeyGen signs ground-breaking deal to combine wind and tidal power output

Free events in Caithness on Autism and Transitions - Wick

Thursday 28th July 2016
As part of The Scottish Strategy for Autism, Autism Network Scotland and ARC Scotland have been funded to run this learning event. The evening session is for parents and carers of a young person making the transition from children's to adult's services. See further down the page for an event for practitioners.

Thereis always a huge variety of events organised by the Rangers in the north and other parts of Highland.  If you want to do something in July then click the poster link.   A longer list taking you up to September in the north can be found HERE
To see all the events in Highland from the Rangers go HERE
To see a events in Caithness from Rangers and many other groups go HERE
Don't forget all the summer activities for children and young people now going on HERE

On Saturday 30th July campaigning organisation 38 Degrees and the charity Campaign for National Parks are celebrating our nation's most beautiful landscapes. They're hosting free organised walks and natural art workshops at every national park in Scotland, England and Wales. We're delighted to announce that Cairngorms National Park and Loch Lomond and the Trossachs National Park will be part of the celebrations!

Effective leadership is an important quality for sports leaders to develop. By strengthening the understanding of key leadership concepts, coaches and other volunteers are able to make an even bigger contribution in their communities. This programme is an ideal opportunity for people actively engaged in voluntary or part-time paid roles in sport / leisure, to develop their leadership and entrepreneurial skills and explore the potential of social enterprise in sport. You will gain insight from expert tutors and speakers as well as other learner experiences.  The courses are fully funded.  See inside for details of the courses which start in September in Wick and Thurso.

The first batches of seaweed have been harvested and processed by a new food and drink business in Wick. New Wave Foods has invested £240,000 at its newly fitted out premises on the Wick Industrial Estate with support of £60,000 from Highlands and Islands Enterprise (HIE). The company turns wild-harvested seaweeds into edible products. A full-time harvesting and processing manager has already been recruited and two other new staff have been harvesting seaweed around the Caithness coast since April. Up to nine jobs will be created within three years.

Plenty  Of Activities For Shildren and Young People In The North This Summer - Check Them Out
So many things to do this month for children and young people in al the main towns.  Once you have checked the leaflet link above go to our What's On for events for everyone througout July.

Castletown Gala 2016
As Bill Fernie was at Lybster Gala this year he could not take photos at Castletown.  James Annal has come to the rescue with his photos and Councillor Wilie Mackay who was on the stage has delivered them over to Bill Fernie who will upload them shortly.  email any other photos for Galas and shows to bill@caithness.org to add to the photo galleries.