Ranger Events In The North April To October
One of the best ways to learn about the county and see nature and the landscape from many different perspectives.  Note up your calendar nwo to go on a few events organisedby the Highland Ranger service.  You wil find the link all yearin the left column on this page.
Wick robbed of points split minutes from time

Wick Academy 2. Cove Rangers 3. Reporter Noel Donaldson. ACADEMY were robbed of a points share by a late Cove strike in the dying minutes. Just when it looked like the Scorries had done enough in the ding-dong battle to justify the draw, Rangers Blair Yule struck! His team-mates had an added reason to celebrate, as the goal was a crucial component in their title chase - but a bitterly disappointing end to Academy's 90 minutes effort.                  39 Photos Of The Match

A squad of volunteers turned upon Saturday 25th March 2017 to help with further tree planting. Volunteers have put in thousands of hours to help develop the woodland. Committee member on site said "So far about 30,000 trees have been planted with an eventual target of 40,000.  Volunteers can stil turn up today and put in as much time as they wish.
Community Pages

New 12 Sided Pounds - Is Your Business Ready?  Round Pounds No Longer Useable From 16 October

Everyone has a few months to dig out all those round pounds from behind the sofa or saved in jars and tims before you can no longer spend them in the shops. Banks and Post Offices will accept them for a period after that.  The new pound is being introduced partly to combat counterfeits that in recent years have seen one in thirty coins being fakes.  Gradually you will see the new coins in your change and issued by the banks.  The Royal Mint has been churning out 3 million a day to prepare for the launch.

Check Out The Community Pages for More Items

Caithness hospital units shut down  - Dunbar Hospital - Press and Journal
The latest announcment by NHS Highland just adds to the run down of health services in Caithness.  CHAT asks "Is this yet another closure for good coming up?"

On Wednesday the 22nd of March, the ERI will be hosting >50 researchers from around the UK and Ireland for the 4th edition of the Flow Country Research Conference. As part of the conference, there will be a scientific poster session open to the public. Everyone will have the change to meet the scientists who study the peatlands of the Flow Country and ask questions about the latest research in a relaxed and informal setting.

The Caithness Science Festival had its annual showcase for many areas of science both in Caithness and from elsewhere with lots of experts to answer questions from people of all ages.

Gills Harbour AGM - Tuesday 21st March 2017
Gills Harbour Ltd Is holding its Annual General Meeting in the PFL Terminal Building at Gills Harbour on Tuesday March 21st 2017, at 7:30pm You are cordially invited to the event, as above.   Business Index

Beatrice Offshore Windfarm Limited (BOWL) has begun renovating its new home in Wick with the help of a neighbour. Two buildings in Lower Pulteneytown are being redeveloped into the Operations and Maintenance (O&M) base for the £2.6bn Beatrice offshore wind farm project. The two buildings were originally designed by renowned Scottish engineer Thomas Telford in 1807 to support marine work in Wick and will soon be brought back to maritime use once complete in 2018.

The Caithness Science Festival  had its official launch on Tuesday with demonstratiosn and tasters of things on during the week in all the schools heading to the big Fun day this coming Saturday at Assembly Rooms, Wick
The kids had hands on a python and found out about the brain and much more.  Satruday will have 27 presenters on stalls and side talks and demonstations so well worth a look. 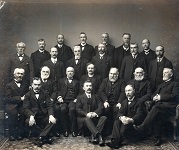 A very good photo has been sent to us by Graeme Lyall of the Reverend Alfred Coutts and the elders of the United Free Church, Bridge Street, Wick. The photo was taken by Johnson Photographers. Rev. Couts was an army chaplain in the First World War.

John O'Groats - Shape The Future - Can You Help? 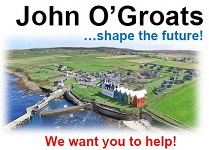 1st April - Park Hotel, Thurso "Friends of Annie", are a local charity that helps young people who are in care or has previously had care experience, we help when they are finding things tough, say their washing machine broke or they need to travel for a family occasion, such as a funeral south and help can be given with the fare, if a young person had an interview help can be given clothing or other expenses. 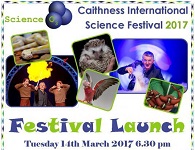 The launch of the 15th Caithness International Science Festival takes plce tonight at Noss Primary School in Wick.  See posters for events or go to the ScinceFestival web site www.science03.org

Highlands and Islands Enterprise (HIE) is encouraging community bodies and third sector organisations across the region to consider applying to the Aspiring Communities Fund. The £18.9 million fund is being run as part of the European Social Fund, with the Scottish Government as lead partner. The deadline for the first round of applications is 7 April. The fund will support community-led projects to develop and deliver services that address local needs.

A record number of volunteers turned out on Sunday (12th March 2017) to assist with habitat enhancement work and access improvements at St Johns Pool near Dunnet in Caithness. Members of the Caithness Countryside Volunteers were joined by representatives from the Caithness Broch Project to create a dynamic team of enthusiastic volunteers. A range of jobs were completed including weeding, landscaping the islands, ditch clearing, path building, clearing vegetation and not forgetting, a successful team building exercise to fix camouflage screening to the viewing hides.

Highland Council 2017 Election Called
The 2017 Highland Council election has been officially called today (Monday 13 March 2017) with the Returning Officer seeking nominations from candidates wishing to stand in the local government elections which take place on Thursday 4 May 2017. A total of 74 Councillors will be appointed to represent the Council in 21 electoral wards, each with three or four elected members. Previously Highland has had 80 councillors. Caithness will now have two wards instead of three and will lose 2 councillors. Landward Caithness will disappear and the two new wards are Thurso and Northwest Caithness  and Wick and East Caithness. each with 4 councillors.

Obituary - HAROLD WILKINSON, born Dundee, 15.09.1931 - Died Inverness 27.02.2017
Harold Wilkinson, who died of a rare type of leukaemia on 27th February, 2017, in Raigmore Hospital, in his adopted home-town of Inverness, established the first Geography department in Wick High during the early 1960s. The geography graduate of Edinburgh University in 1960 went on to have a full career mainly in senior education management . He then held Director-level posts, firstly with Inverness-shire and then with the Highland Region, also based in Inverness, in wider fields, until his retirement in 1995. 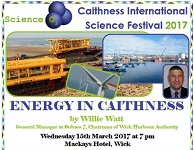 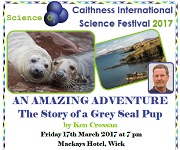 On your doorstep in Caithness are lots of seals.  How much do you know about them?  Go along and listen to Ken Crossan an see his wonderful photos to understand what you can see. 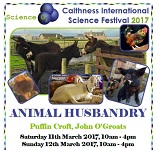 The Lybster & Tannach non-formal learning bursary scheme launched in January 2017 to benefit residents within the Lybster, Latheron & Clyth and Tannach & District Community Council areas. The scheme is available to individuals and groups who are looking to take part in non-formal learning projects. The scheme is managed by Lybster & Tannach, a charitable company established to administer the Burn of Whilk Wind Farm community benefit fund. Burn of Whilk windfarm is located South East of Wick and is owned and operated by Eneco UK. A drop in event for more information on this scheme is being held on Thursday 9th March 2017 between 6.00pm and 8.30pm at Clyth Community Hall.

Calls for independent review of north maternity services amid claims patient safety is at risk
and if that was not enough for concern about Northern health services.........................
Unite members back official dispute with ambulance service 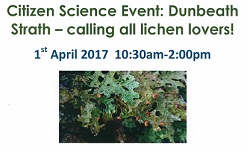