Late shopping online can be a gamble so check these dates in this item with caution if you live in Caithness or the far north. 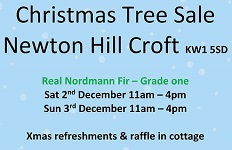 The collpase at the Children's Play Park has prompted a swift response with contractor's men out on Saturday and Sunday cutting trees and removing anything dangerous.

The wet weather has taken its toll on the old wall at Wick Harbour and has partially collapsed.  It remains to be seen how much more will have to be demolished if it has become unstable.

Decorated Umbrella Parade and Christmas Lights Switch on at Wick

Despite another atrocious day for weather in Caithness the decorated umbrellas parade and switch on of the Christmas Lights went ahead.  Santa was kept busy chatting to kids in his hut in Market Square.

Officers from Police Scotland working with a range of partner agencies have worked together to remove a number of abandoned and untaxed vehicles from the roads of the Highlands. The first week of action has seen in excess of 50 vehicles seized and 40 clamped. This action has followed a number of complaints from local residents regarding apparently abandoned vehicles and vehicles which have clearly been used without excise.  Anyone who wishes to report untaxed vehicles should do so online at the following online address:
https://forms.dft.gov.uk/report-an-untaxed-vehicle/

More Rail Disruptions On Inverness To Wick Saturday 25th and Sunday 26th November
This time it is engineering works. This week has already seen landslips with one near Wick but they have been cleared.  Passengers face bus trips - see the link for details.

Snow Warning For Thursday
The Met Office has issued a yellow "be aware" warning for snow for large parts of Scotland on Thursday. It has forecast that snow showers will be "heavy and persistent" for a time in the morning, before easing during the afternoon. Up to 5cm could fall at lower levels, but up to 20cm on Scotland's mountains.

Thurso Players Panto - Robin Hood and The Babes in the Wood

The show starts at 7pm this year after several years with a 7.30pm start.
Can our favourite outlaw, Robin Hood, outwit the evil Sheriff of Nottingham who has hatched a cunning plan to dispose of his niece and nephew in Sherwood Forest so he can inherit their fortune? Come and join Robin's gang and help our hero win the day, and also win the heart of Maid Marian.

Wick Lifeboat called out by Shetland Coastguard at 09:35 this morning to go to the aid of a cargo vessel 'Jomi', half a mile offshore in Sinclair's Bay, Caithness. They had reported dragging its anchor in the Easterly swell and unable to get its engine started. The relief boat presently stationed at Wick made best speed to the scene. As the vessel was in danger of further slipping towards shore it was deemed best to call in the Wick lifeboat which was going to sea on trials following an electronics refit, to attend as well in the case of the vessel having to be towed to deeper and safer water.

Businesses and organisations are being encouraged to apply for funding through the Highland & Moray Fisheries Local Action Group (FLAG) as part of the European Maritime & Fisheries Fund. Funding can be used to support a wide range of projects that will boost the local economy and create jobs within the fishing, aquaculture and maritime industries including tourism and seafood sectors.

To celebrate the launch of our first Annual Winter Open Exhibition, we are delighted to invite the local community to join us at our Gallery at Quatre Bras from 7-9pm on Friday 24th November 2017. This exhibition is designed to provide an opportunity for Scottish artists to exhibit their work in our Gallery Space located just off the A9 at Lybster. This exhibition also offers the people of Caithness and the surrounding areas a chance to see work by many different artists, all at the same time. Our Winter Open Exhibition is an annual exhibition of work from artists across Scotland, chosen from an Open Submission call by North Lands Creative. Featured artists include local jeweller and scratch art artist, Lindsey Gallacher, Orcadian artist and designer, Louise Barrington, Garve-based digital artist, Angelica Kroeger and stained glass artist Kate Henderson.

Too many staff apply for redundancy at Dounreay - Energy Voice
Dounreay bosses have been hit with an “over-subscription” of staff wanting to leave the nuclear plant under a redundancy programme which had sought 150 volunteers – 15% of the workforce.

End Of The Dome Now In Sight At Dounreay

Dounreay Site Restoration Limited has submitted a planning application to the Highland Council covering a series of decommissioning projects expected to take place between 2018 and the site's shut down, also known as the interim end state. The application, which is the last of three planning phases covering the overall decommissioning of the site, follows engagement undertaken earlier this year including public events and an opportunity to comment on draft documents online.


Participatory Budgeting Steps Up
The announcement from COSLA that 1% of local authority spending is to be allocated through some kind of Participatory Budgeting process heralds a step change in terms of the scale of ambition for this method of allocating public funds - 1% equates to roughly £100m. To date, it's probably fair to say that most activity has centred on the allocation of relatively small pots of funding to local projects. This 1% commitment takes it to another level. What's not yet clear is what that level might look like. There should be some pointers in the mid-term evaluation of recent PB experience. So far in the Highland Council are Participatory Budgeting has been brought forward by putting relatively small amounts transferred from the local Discretionary Budget towards local votes to give money to local causes. Effectively allowing the public to choose rather than local councillors which groups should receive funds.

Caithness to the Côte D'Azur - A New Book

Caithness to the Côte D'Azur When the Monte Carlo Rally Started from John O'Groats Limited Edition of 300 numbered copies.  ‘Many excellent books have been written about the Monte Carlo Rally but despite the fact that the first British winner started the rally from Caithness in 1926, the Scottish connection during the pre war years has been largely overlooked. This may be due to the lack of an overall winner from among the John O'Groats starters in subsequent years because of the complex scoring system which made it virtually impossible for them to achieve outright victory.    More Books

Newsletter Award For Friends of the Far North Line  - Congratulations from Caithness.org

MSP praises campaign group for award. The honorary vice-president of Friends of the Far North line has lodged a motion in the Scottish Parliament praising the campaign group for winning a top award. Highlands and Islands Labour MSP, Rhoda Grant, lodged the motion after hearing that the group and its newsletter editor, Ian Budd, had been awarded the Best Newsletter Gold Award. And they have nice web site.  You can support their campaign efforts by becoming a member for just £15 or £12 if you sign up for an annual amount via the bank.  The web site has lots of rail information and photos.  And Facebook.......... 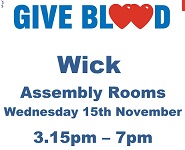 Phone ahead now to make your appointment


A Walk Round Central Thurso