The most modern vessel in the Far North of Scotland's 'marine renewables' fleet is conducting debut operations in the Pentland Firth's Inner Sound this week. (commences 24.08.15). The brand-new many-purpose mini-ship Green Isle is being accompanied on her mission off Canisbay by the survey vessel Lodesman, that has been a regular visitor to Gills Harbour this year. The 27.7-metre long Green Isle was delivered 'in record time' earlier this summer to her owners Green Marine UK Ltd, of Stromness, Orkney from the Damen Shipyards, in the Netherlands.

Northern Scotland despite its Viking heritage does not have a modern Viking Festival. However, Caithness Horizons Museum in Thurso is currently trying to secure the funding required to establish one, similar to, but unique from those that exist already. Caithness Horizons is delighted to announce that in order to develop the interpretative content of the Viking Festival, that the Museum will be working with renowned Viking experts based at the Centre for Nordic Studies, UHI in order to ensure that the Caithness Viking Festival meets the highest levels of scholarship.

The quiz will be held next Thursday, 27th August, 7:30 start at the Royal British Legion Thurso, £10 per team – 4 person’s maximum. If anyone wishes to donate raffle prizes for the evening all is welcome. For more information and to donate to Kayden: Donate to Sarah's JustGiving page

Back to school: 11 fascinating kid's dental health facts you really need to know

It may be the school holidays at the moment and we all remember those halcyon days of never ending summers but the new term is closer than you think. The constant reminders are everywhere with displays selling pristine white shirts and pencil cases taking pride of place in the nations supermarkets. For parents across Britain this may be comforting news, as around about now your children will have destroyed almost every part of your once tidy house. Countless toy parts will have been lost or broken and if you suffer the unparalleled pain of stepping on a building block again while hearing "I'm bored" repeated for the 526th time, you may just crack.

Suzanne Carter's Camps "1" have won the Wick & District Summer Pool League for the second year in a row after a 12-8 victory against Camps "2" in this years final. After a 7-4 first leg victory, Camps "1" needed five frames to win the title, and produced an outstanding performance to become the first team to win back to back summer league championships. The first frame of the second leg saw Camps "2" captain Bruce Honeyman play well to put his side 1-0 up, but David McGillivray battled hard to level the match at 1-1.    more


Childminders Qualification SVQ3
HiMATS have developed a programme of SVQ delivery specifically for Childminders. This qualification is tailored from the SVQ 3 Social Services Children and Young People at SCQF Level 7 qualification and is FREE subject to meeting funding requirements.   Community Index

The Highland Doors Open Days programme for 2015 has been launched, with a total of 47 North buildings - new and old - opening their doors in September this year to allow the public to see inside them and find out about their stories. Participating buildings will be opening in different Highland Council areas over the four weekends in September, with free admission to all venues and many offering special events and activities.
Programme Booklet (Pdf)

The Polli:Nation project - developed by the national school grounds charity, Learning through Landscapes (LTL)- will encourage school children and volunteers in 260 schools across the UK to transform their outdoor spaces into pollinator-friendly habitats. The three-year project, funded by the Heritage Lottery Fund (HLF), will also reach out to communities and families that have an interest in getting involved. As from January 2016, each school involved will be supported by a Polli:Nation facilitator from LTL, enabling them to grow pollinator friendly plants and meadow areas, to develop areas that encourage habitats (such as bee houses, bug hotels, and bee-hives), whilst letting areas of the school grounds become wild. The project will also help schools and communities to learn more about reducing pesticides. In Caithness, schools will have the opportunity to put these skills into practice to conserve one of the UK’s rarest bumblebees, the great yellow bumblebee, linking to the Bumblebee Conservation Trust’s existing project in the county.

The breezy conditions at Dunnet Beach provided excellent flying conditions for the kites made during the children's countryside Ranger craft event at the Seadrift Centre in Caithness. Thirteen children from five families assembled their very own kites using plastic bags and garden canes in the Seadrift Centre then went out on the beach to fly them.
Community Index

THE Fort must have been dying to hear the ref whistle time-up before Academy made a humiliating defeat even more embarrassing by taking their score into double figures. The Scorries put down a marker when Gary Manson open their account in no less that three minutes and Danny Mackay and Steven Anderson made it 3-0 before the break. The second period brought more misery for the visitors who had no answer to Academy's goal machine, churning out a further five, Steven Anderson clinching a hat-trick in the dying minutes after an Ian Maclennan strike gave the luckless Aberdeenshire side, a consolation crumb of comfort.   Photo Gallery

A new course starts in September leading to a qualification.

Lyth Arts Centre Puts On A Great Programme In September

The line up of performances in music and drama including comedy goes on at Lyth Arts Centre. Despite recently almost going under as their grant from Creative Scotland being under threat they have bounced back with a great programme including one double bill evening with buffet for you to pick and choose from.  After every Edinburgh festival a few performances make their way to Lyth so this is great chance to catch a great night out and get a flavour of the festival right here in Caithness and support a great little theatre.  Book early.

Black Is The Colour Of My Voice TINA MAY AND NIKKI ILES IN CONCERT THE BEN COX BAND IN CONCERT Lyth Arts Centre Double Bill - JAZZ EXTEMPORE plus EVERY BRILLIANT THING  - Buffet - Go to one or all.

As the new Nuclear Archive at Wick gets going we have started another gallery to bring photos of progressover the coming 18 months.

Tuesday 11th August saw local group No Limits Caithness visit the Museum for a morning packed with Viking activities with Curator Joanne Howdle, or Thordis Eiríksdóttir as she is fondly known to local groups and schools. The group helped the Museum to hit the half million visitors mark and to celebrate they were presented with a special cake made in the Museum's cafe. The 2015 summer season has been excellent for the Museum, welcoming visitors from all over the world to experience all that Caithness has to offer. A passenger from the Saga Pearl 2 cruise ship who visited Caithness Horizons last weekend remarked that it was the best Museum that she had visited.


10,000 Caithness homes and businesses have access to new broadband networks
More than 10,000 homes and businesses in Caithness can now access next generation fibre broadband through the Digital Scotland Superfast Broadband (DSSB) roll-out. Work is to start during the next six months to make fibre broadband available to nearly 900 more premises in the far north as building work on the roll-out continues. In addition, following a re-modelling of the roll-out plans, Highlands and Islands Enterprise (HIE) is confirming that the village of John O'Groats, which had been under evaluation, will see some fibre broadband installed in the 2016 programme. 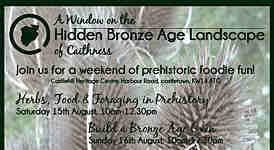 Join Melissa and Romain of the School of Ancient Crafts on 15th August as we explore how plants and herbs were used in the past. This workshop will include a spot of foraging as well as making soap with native herbs, using pot-boilers (hot stones) to heat milk and make a soft cheese, baking bread next to an open fire, and much more!
Join us again on Sunday 16th August to learn how to build a prehistoric oven in which we will bake fish and bread.
Free for the whole family.
See poster for full details and to book.

Scotland's Shadow Minister for Transport Mr David Stewart, Labour MSP for the Highlands & Islands constituency, has made a fact-finding visit to community-owned Gills Harbour on the shores of the Pentland Firth's Inner Sound. There he was shown around by three officers of Gills Harbour Ltd (GHL), the Canisbay company that owns and operates the Scottish Mainland's most Northerly port. The Shadow Minister promised 'to do anything that I can' to assist 'the people's port' that belongs to 600 electors in Canisbay, with its upgrading plans aimed at ensuring that it plays an integral role in key aspects of Pentland Firth tidal-stream electricity generation in the future.

Pulteneytown People’s Project is contracted to deliver The Employability Fund Programme for Skills Development Scotland (SDS). The purpose of the programme is to prepare people for employment or further training opportunities in their chosen work interest area, by supporting them to improve their knowledge and basic skills required for their chosen sector.  Next start date 31st August 2015 -

Open to anyone aged 16 or over who is unemployed.  Child care costs available.

Local girl uses dance skills learnt at Rush.dance and wins Golden ticket to perform main stage with her dance idols Diversity. Beth Mackay 12 years old (Wick). Beth Mackay went to Butlin's Holiday Camp, Skegness from July 24th to 31st. She was there for a granny (Sandra Jones) / grand-daughter holiday and had chosen this site because we had seen Diversity Dance Academies advertised on television earlier in the year.

This August 21st is the start of Great Yellow Week in Caithness, a chance to search for one of Scotland's rarest bees and discover why bumblebees are so important. The Bumblebee Conservation Trust is hosting events at The Park Hotel, Thurso, where the charity is encouraging volunteers from the area to get involved and help spot this rare bumblebee. The event will kick start on Friday 21st August with two bee identification training sessions run by Katy Malone (Conservation Officer Scotland) and Dr. Richard Comont (Data Monitoring Officer) before volunteers head out in small groups on the 22nd August to walk designated transects across the county.

From Caithness to the World  - Nuclear Archive Centre Construction Underway

A ceremonial turf cutting ceremony marked the official start of building work on the new archive that will store nuclear records from across the UK. David Flear, chairman of the Dounreay Stakeholder Group, dug into the ground at the Wick site where the Nuclear Decommissioning Authority's Nuclear Archive will start to take shape over the next 12 months. He welcomed the step forward saying: "The NDA Archive brings a lasting legacy to the area, and I am delighted it is progressing so well. The Dounreay Stakeholder Group has been involved with the NDA on this project for some time now and everything we hoped for appears to be taking shape."

Reporter Noel Donaldson. WICK ACADEMY bounced back from their opening Clach wobble to get their league challenge back on track. However, it was a hard-earned victory in a game which saw both sides up for the points before a good crowd at rain-swept Harmsworth park, yesterday.

The duke of Rothesay visited the annual art exhibition from the society of Caithness Artists.  He was shown round by member Ian Pearson and met some of the members of the society.
For more photos see photgrapher Angus Mackays web site.

This past week kids have been learning how to make their own pigments from items found on the seashore and making their own creations.  The project by Northlands Creative Glass has been running  for the past few days at the harbour.