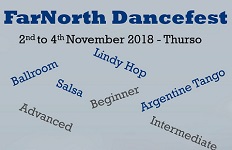 On the 2nd to the 4th of November 2018, Thurso Come Dancing are hosting the first ever "FarNorth Dancefest". We are bringing 4 teachers from the Inverness area to 4 venues in Thurso to run simultaneous workshops for a weekend extravaganza. They will be teaching fun routines at varying levels in their own dance styles - Latin, Ballroom and Sequence dancing with Caroline Coomber from Elgin, Salsa with Cuban Passion in the Highlands, Argentine Tango with TangoNess and Lindy Hop and Charleston with Highland Swing.

4 of the workshops are already full and some of the others 3/4 full already so be quick if you want to get dancing.

The Caithness & North Sutherland Fund has recently committed over £50,000 to six community projects in its latest round of grant awards. Jim MacGregor, CNSFund Chair said, ‘'Our latest funding investment supports improvements to historic and cultural visitor points of interest, village festivities, tourism development, watersports events and young people initiatives. To help us achieve our aims, we encourage groups to continue coming forward with proposals that deliver a sustained benefit for our communities".

Easy to learn, fun and sociable, badminton is a great way for people of all abilities to keep active. The game keeps you active despite age and a whole range of conditions More than one million Britons regularly play the game, which is the world's second most popular participation sport, according to the BBC Sport Academy. The game can be as slow or as fast as you want it to be.


Places and Dates To Come and Try Badminton

The Highland Council has appointed a new Chief Executive. The successful candidate is Donna Manson, currently Service Director for Children and Young People in the Scottish Borders. Mrs Manson was appointed by a senior members' appointment panel on Friday 14 September 2008 and will take up her role following the retirement of Chief Executive, Steve Barron. Donna started her career teaching in areas of deprivation and has a real passion for reducing inequalities for families. She worked in Education in Edinburgh and Fife before going into her current post with the Scottish Borders Council, where she has gained extensive experience of all Council areas and working with partners as a Corporate Director.  - - - Business Index

John William 'Jocky' Sutherland, who died suddenly of a heart attack at the age of 68 on 28th August, 2018 at his home in Wick, Caithness, was a charismatic self-made businessman. He will be chiefly remembered for his key role in re-launching the traditional, but near moribund 200-year-old Caithness flagstone 'pavement' industry into the modern era, from the early 1990s onwards. The tycoon's other firms will also remain prominent in a range of Far North enterprises, from entertainment to farming, house-building, providing laundry services to local hotels and an estate-agency, thanks to his sons' directorships and management. Jocky's companies introduced state-of-the-art extracting. cutting, milling and polishing equipment to once again make the natural 400 million year-old quarried, hard-stone paving product competitive in modern Scottish, UK and international market-places, capable of winning contracts regularly running into millions of pounds.   Community Index

Thursday 20th September 2018 sees the opening of the fourth concert season of Music in Thurso, which sees world class musicians coming to Caithness to perform. Set up following the closure of Thurso Live Music Association, Music in Thurso aims to host a wide variety of classical music concerts to appeal to audiences of all ages. Concerts are held throughout the autumn and winter and are always in the same venue - Thurso West Church, starting at 19:30. The fourth season is delighted to host seven concerts over the autumn and winter months, an increase on the usual six. The price of an adult season ticket is excellent value at £55, working out a saving of £15 off the door price. Adult tickets on the door have been reduced to £10 this year to encourage as many people as possible to attend. Other ticket prices remain unchanged with under 16s free, while students (over 16) £3.

Dunnet Bay Distillery, the UK's most northerly mainland is distillery, has secured a highly sought-after five star rating from Visit Scotland, recognising it as one of the country's top tourist attractions. The distillery, which is located in Caithness and on the North Coast 500 route, picked up the accolade for the regular tours it hosts for visitors, which include tutored tastings of its multi award-winning spirits.

The next hub meeting is planned for Tuesday the 25th of September 2018, 6.30-8pm in East Caithness Community Facility's dance studio. Please find the next meeting's agenda attached; the previous presentation from Katie Matthew's and the meeting notes from the last meeting. To help with planning, please can you let me know if you or a rep from your club/organisation will be attending the meeting. If you cannot attend if you could also let me know and please feel free to send me a club/organisation update. Kirsty Baird - Community Sport Hub Officer

There will be a meeting on 6th September 2018 at 7.00pm in the Seaforth Club - Small Lounge regarding the new season of bridge playing. New members are always welcome. Anyone willing to learn to play or who already can play is invited. 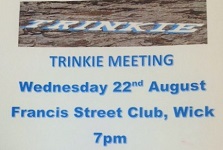 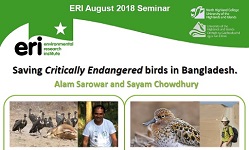 Environmental Research Institute (ERI), Thurso have two speakers, Alam Sarawar and Sayam Chowdhury who will be talking about "Saving Critically Endangered birds in Bangladesh." The presentation will be held in the ERI seminar room, Castle Street in Thurso - doors open at 5.15pm. ERI seminars are free and open to the public - light refreshments will be provided. We look forward to seeing you there. Castle Street Seminar Room, Thurso, - 5.30 pm Two half hour talks.


AED Road Show This Week In Various Halls In Caithness

PROUD NESS OUT-REACH EVENT
The Highland Lesbian, Gay, Bisexual, Transgender and Intersex Forum have organised a Proud Ness event in Inverness on 6th October 2018, which will be supported by an out-reach event in Thurso Precinct on 11th August 2018, 11am to 4pm.

The closure of The Original Factory Shop in Wick is the latest one to go in the county with Wick seeing the demise of the Homebase store also this week.
A closing down sale starts on Thursday 9th August 2018.

A TRIBUTE was paid at the AGM of Caithness Heart Support Group, recently, to long-serving chairman Ernie Ross, standing down after nine years service. Highlighting Mr Ross's contribution, the new chairman, Noel Donaldson said: "Ernie has not always enjoyed the best of health but has always given us a one hundred percent commitment to the group and that has been greatly appreciated." However, Mr Donaldson was pleased to add that Mr Ross was not severing his connection with the group but has decided to remain as a committee member.

A Wick High School teacher is spending the summer in Rwanda delivering teacher training opportunities in the country. Caitlin Morrison, who teaches social subjects and history, is travelling to the Zaza in the Eastern Province as part of the Global Learning Partnerships (GLP) professional development programme alongside charity Inspire, Educate and Empower Rwanda.

Wick Voices, the Wick Society's oral history section, has broken through the 100,000 barrier in terms of listener response to its collection of online recordings. That's how many individual plays there have been since the project was set up less than two years ago with the aim of preserving local voices for posterity.