Recently re-branded North Lands Creative (Formerly North Lands Creative Glass) has successfully completed a re-structuring and held an international conference ahead of an exciting new programme of activities. Located in the delightful village of Lybster, Caithness the organisation is planning a colourful, vibrant and engaging programme of workshops, classes and exhibitions on the Lybster campus, complimented by associated events that include bite-size tours, studio talks, curator/ artist in conversation events, workshops and schools visits.

Another Batch Of Photos For Wick Gala 2017 From Alistair Sinclair

A beautiful day in Caithness carriedon to the evening for great Wick Gala night.

Come and join in a family fun day out at John O'Groats. Packed full of events, exhibitions and things to see and do including Highland Dancing, traditional Pipe and Drum Band, track and field events, a dog show, a classic car parade and the world famous Tug of War! The kids can enter the egg and spoon race, the three legged sprint or a sack race. If thats too energetic theres a bouncy castle and a creche too! Alongside the fun and games there will be loads of local arts, crafts and food stalls. PLUS for the first time, an adult only refreshment zone featuring beers from The Black Isle Brewery, whisky from Wolfburn Distillery and a cocktail bar hosted by Rock Rose Gin and Holy Grass Vodka.   Check the Facebook page for other changes to this years Mey Games

Caithness County Show 2017 Starts Tonight
A chance to get a an early look at the county show is always available on Friday evenings before the big day on Saturday.  On Saturday the gates are open very early with judging of animals underway by 8.00am.  As always a huge programme of events and things to see at Wick riverside with the show ending about 6.00pm to be followed by the Dance in the evening in the Norsemsan Hotel.  Caithness County Show Facebook Page 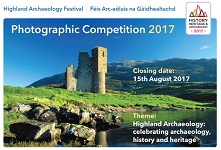 Planning is already underway for the Highland Archaeology Festival, the huge celebration of Highland heritage which takes place in October, organised by The Highland Council. New this year is a chance to capture a bit of Highland Heritage in the HAF2017 photographic competition. The competition invites people to submit one or two pictures which celebrate Highland archaeology, history or heritage. Highland Council Archaeologist Kirsty Cameron explains: "It could be a monument in the landscape, a building, an object in a museum or people enjoying our varied heritage - there's so much to choose from. We've kept it simple, with entries invited from under 16s and over 16s." 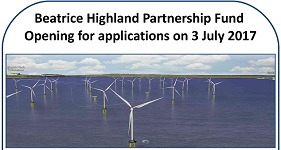 Community Groups can now apply for funds from the Beatrice Highland Partnership fund. Grants are available from £10,000 to £50,000.